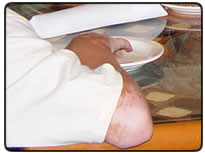 The main sign of vitiligo is pigment loss that produces milky-white patches (depigmentation) on your skin. Other less common signs may include:

Although any part of your body may be affected by vitiligo, depigmentation usually first develops on sun-exposed areas of your skin, such as your hands, feet, arms, face and lips. Vitiligo generally appears in one of three patterns:

Although it can start at any age, vitiligo often first appears between the ages of 20 and 30. The white patches may begin on your face above your eyes or on your neck, armpits, elbows, genitalia, hands or knees. They're often symmetrical and can spread over your entire body. The disorder affects both sexes and all races equally.

Most people with vitiligo are otherwise healthy and have normal skin texture and sensation. However, the condition may be more common in people with certain autoimmune diseases - diseases in which your immune system reacts against your body's own organs or tissues - such as Addison's disease, vitamin B-12 deficiency anemia (pernicious anemia), or thyroid disorders, including hyperthyroidism and hypothyroidism.

The natural course of vitiligo is difficult to predict. Sometimes the patches stop forming without treatment. In other cases, pigment loss can involve most of the surface of your skin.