I was born in Sierra Leone, West Africa at the height of a decade-long civil war there. 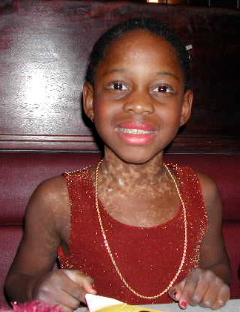 In addition to loosing both of my parents in that war, I had vitiligo.  Among the villagers of my country, vitiligo is considered a curse of the devil.  I was considered to be the devil’s child, and people either ridiculed me, shunned me or beat me.

When I was four years old the wind blew a magazine against the gate of the orphanage where I lived.  It was jammed there until I rescued it.  That is when I discovered the photograph of a beautiful ballerina on the cover.  She looked so happy and carefree, that I dreamt of being just like her.

A few months later I was adopted by an American family, and soon after that my new parents encouraged me to take ballet lessons.  At first I wondered if the world would accept a spotted ballerina, but eventually I became so engrossed in my dancing that I forgot about my spots.

My parents never seemed to care that I was spotted, possibly because vitiligo ran in my adopted family.  Soon I realized that my ballet teachers weren’t concerned about my spots either.  When they looked at me they saw my talent, not my vitiligo.  Eventually, after years of hard work and determination, my dream came true, and I became a professional ballerina.

I have traveled the world as a ballerina, dancing in South Africa, the Netherlands, Israel and Turkey.  I have danced with the South African Mzansi Ballet as a guest, and with the Dance Theatre of Harlem as a company member. This year I am dancing with the Dutch National Ballet, one of the most famous classical ballet companies in the world. 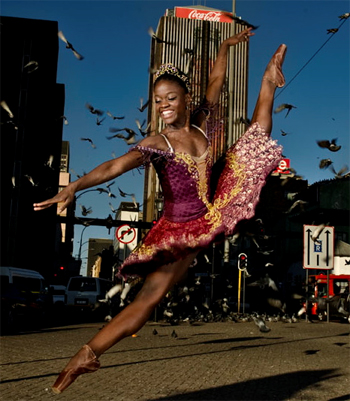 I am very open about my vitiligo.  I hope that by my example, I can inspire other young people with vitiligo to strive to make their dreams come true too

Michaela's birthdate is January 6, 1995.
My son Michael was born with hemophilia, a bleeding disorder, in 1978.  When he was seven years old he contracted HIV from the contaminated blood plasma product used to treat his hemophilia.  Michael died at the age of fifteen, but before his death he begged me to adopt a, “Starving child from a war-torn country in Africa.” 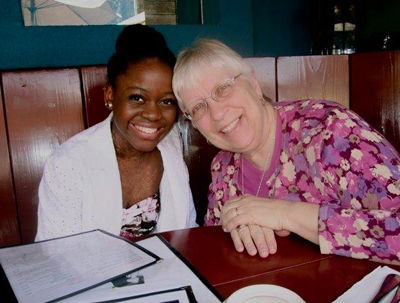 In 1999 my husband and I were in the process of adopting a four-year-old girl from Sierra Leone.  That is when I learned that there was another little girl from the same orphanage, who needed an adoptive family.  My adoption worker said, “We cannot find a family for this other child, because she is spotted.  We have presented her to twelve families, but they all thought that she’d have serious self-esteem issues when she reached her teens.”

When I saw the picture of the little girl, I realized that she had vitiligo.  I laughed because Michael and I both had vitiligo.  I knew that this child was meant for us.  My husband and I adopted her and named her Michaela, after our beloved son who had inspired us to adopt from Africa.

Fifteen years have passed since we made the decision to adopt Michaela.  She is no longer described as a “spotted child” by anyone.  Instead, she is described as a “famous ballerina.”

Back To Vitiligo Voices