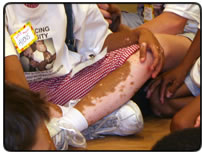 People of all races are born with approximately the same number of pigment cells (melanocytes). The rate at which melanin granules are formed in these cells and their concentration in the epidermis are inherited characteristics and major factors in skin color differences. When no melanin is produced, the involved patch of skin becomes white. When a white patch grows or spreads, the cause may be vitiligo.

The exact cause of vitiligo isn't known. Doctors and scientists have theories about what causes the disorder. It may be due to an immune system disorder. Heredity may be a factor because there's an increased incidence of vitiligo in some families. Some people have reported a single event, such as sunburn or emotional distress, to trigger the condition. However, none of these theories has been proved to be a definite cause of vitiligo.