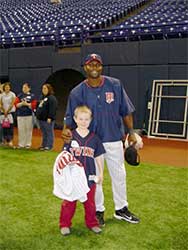 Through the efforts of the AVRF, Cooper has become the second recipient of the Foundation's "Kaleah's Dream" program. The program was instituted to grant the wishes of children affected by vitiligo in an effort to lift their spirit and instill them with hope and a positive attitude. "We are happy to bring this exciting and positive experience to Cooper and his family," said Twins representative, Peter Martin.
Cooper was diagnosed with vitiligo at the age of 3, and like other children and adults with the disease, hopes that a cure will be developed one day. Vitiligo is a disfiguring medical disease of unknown origin that causes permanent white patches to appear and spread across the skin. The disease, which results in the absence of pigment affects about 1-2% of the world's population including 6 million people in the United States. Vitiligo does not discriminate. It affects all ethnic origins and both sexes. The disease can begin on any part of the body, but the first loss of pigment usually occurs on the hands, feet, arms, face and/or lips. 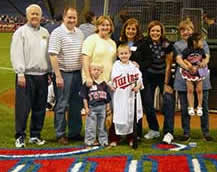 Currently there is no known cure for this progressive condition. The disease is not fatal, but it often causes serious emotional stress. Studies document that at least two thirds of patients significantly underachieve their potential because of the psychosocial difficulties resulting from the disfigurement.